Previously we have looked in depth at a simple generative classifier (naive Bayes; see In Depth: Naive Bayes Classification) and a powerful discriminative classifier (support vector machines; see In-Depth: Support Vector Machines). Here we’ll take a look at motivating another powerful algorithm—a non-parametric algorithm called random forests. Random forests are an example of an ensemble method, meaning that it relies on aggregating the results of an ensemble of simpler estimators. The somewhat surprising result with such ensemble methods is that the sum can be greater than the parts: that is, a majority vote among a number of estimators can end up being better than any of the individual estimators doing the voting! We will see examples of this in the following sections. We begin with the standard imports:

Random forests are an example of an ensemble learner built on decision trees. For this reason we’ll start by discussing decision trees themselves.

Decision trees are extremely intuitive ways to classify or label objects: you simply ask a series of questions designed to zero-in on the classification. For example, if you wanted to build a decision tree to classify an animal you come across while on a hike, you might construct the one shown here:

The binary splitting makes this extremely efficient: in a well-constructed tree, each question will cut the number of options by approximately half, very quickly narrowing the options even among a large number of classes. The trick, of course, comes in deciding which questions to ask at each step. In machine learning implementations of decision trees, the questions generally take the form of axis-aligned splits in the data: that is, each node in the tree splits the data into two groups using a cutoff value within one of the features. Let’s now look at an example of this.

Consider the following two-dimensional data, which has one of four class labels: 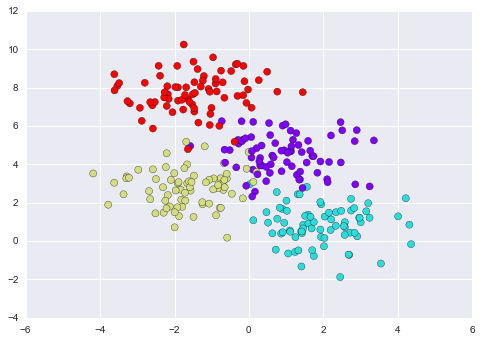 A simple decision tree built on this data will iteratively split the data along one or the other axis according to some quantitative criterion, and at each level assign the label of the new region according to a majority vote of points within it. This figure presents a visualization of the first four levels of a decision tree classifier for this data:

Notice that after the first split, every point in the upper branch remains unchanged, so there is no need to further subdivide this branch. Except for nodes that contain all of one color, at each level every region is again split along one of the two features.

This process of fitting a decision tree to our data can be done in Scikit-Learn with the DecisionTreeClassifier estimator:

Let’s write a quick utility function to help us visualize the output of the classifier:

Now we can examine what the decision tree classification looks like: 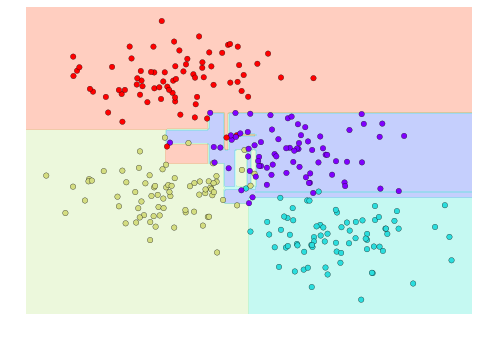 If you’re running this notebook live, you can use the helpers script included in The Online Appendix to bring up an interactive visualization of the decision tree building process: 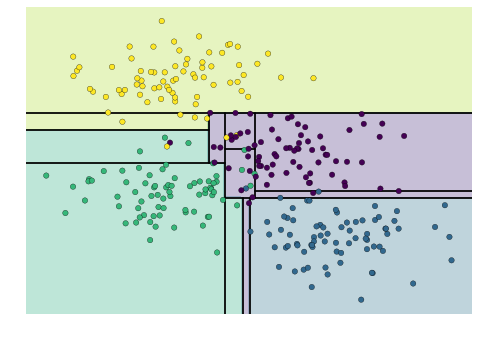 Notice that as the depth increases, we tend to get very strangely shaped classification regions; for example, at a depth of five, there is a tall and skinny purple region between the yellow and blue regions. It’s clear that this is less a result of the true, intrinsic data distribution, and more a result of the particular sampling or noise properties of the data. That is, this decision tree, even at only five levels deep, is clearly over-fitting our data.

Such over-fitting turns out to be a general property of decision trees: it is very easy to go too deep in the tree, and thus to fit details of the particular data rather than the overall properties of the distributions they are drawn from. Another way to see this over-fitting is to look at models trained on different subsets of the data—for example, in this figure we train two different trees, each on half of the original data:

It is clear that in some places, the two trees produce consistent results (e.g., in the four corners), while in other places, the two trees give very different classifications (e.g., in the regions between any two clusters). The key observation is that the inconsistencies tend to happen where the classification is less certain, and thus by using information from both of these trees, we might come up with a better result!

If you are running this notebook live, the following function will allow you to interactively display the fits of trees trained on a random subset of the data: 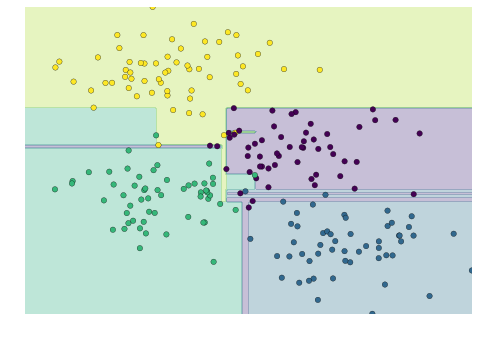 This notion—that multiple overfitting estimators can be combined to reduce the effect of this overfitting—is what underlies an ensemble method called bagging. Bagging makes use of an ensemble (a grab bag, perhaps) of parallel estimators, each of which over-fits the data, and averages the results to find a better classification. An ensemble of randomized decision trees is known as a random forest.

This type of bagging classification can be done manually using Scikit-Learn’s BaggingClassifier meta-estimator, as shown here: 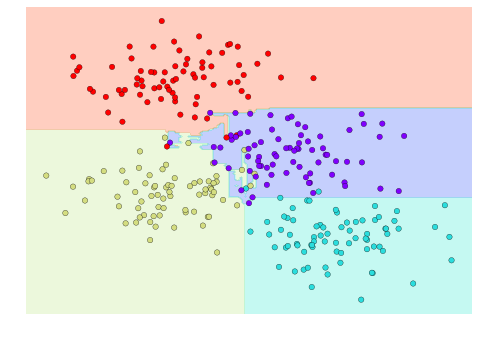 In this example, we have randomized the data by fitting each estimator with a random subset of 80% of the training points. In practice, decision trees are more effectively randomized by injecting some stochasticity in how the splits are chosen: this way all the data contributes to the fit each time, but the results of the fit still have the desired randomness. For example, when determining which feature to split on, the randomized tree might select from among the top several features. You can read more technical details about these randomization strategies in the Scikit-Learn documentation and references within.

In Scikit-Learn, such an optimized ensemble of randomized decision trees is implemented in the RandomForestClassifier estimator, which takes care of all the randomization automatically. All you need to do is select a number of estimators, and it will very quickly (in parallel, if desired) fit the ensemble of trees: 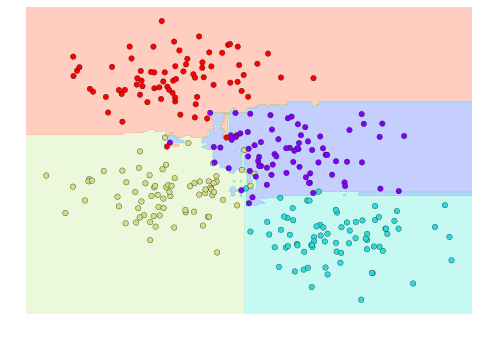 We see that by averaging over 100 randomly perturbed models, we end up with an overall model that is much closer to our intuition about how the parameter space should be split.

In the previous section we considered random forests within the context of classification. Random forests can also be made to work in the case of regression (that is, continuous rather than categorical variables). The estimator to use for this is the RandomForestRegressor, and the syntax is very similar to what we saw earlier.

Consider the following data, drawn from the combination of a fast and slow oscillation: 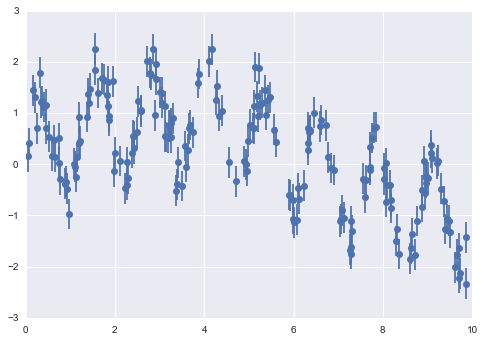 Using the random forest regressor, we can find the best fit curve as follows: 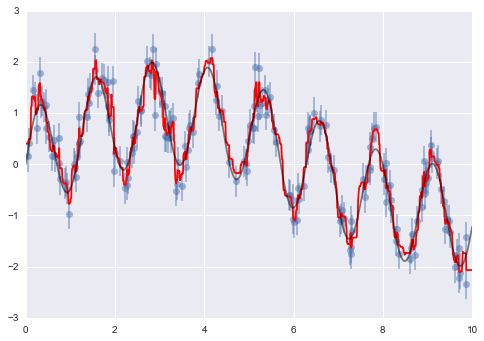 Earlier we took a quick look at the hand-written digits data (see Introducing Scikit-Learn). Let’s use that again here to see how the random forest classifier can be used in this context.

To remind us what we’re looking at, we’ll visualize the first few data points: 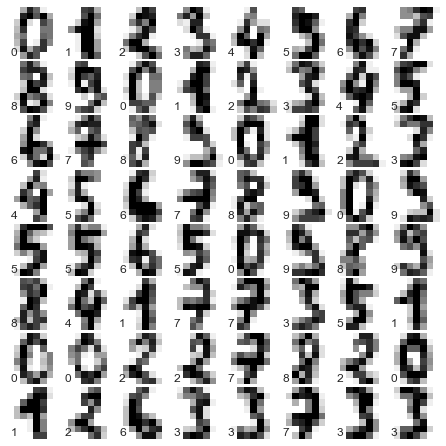 We can quickly classify the digits using a random forest as follows:

We can take a look at the classification report for this classifier:

And for good measure, plot the confusion matrix: 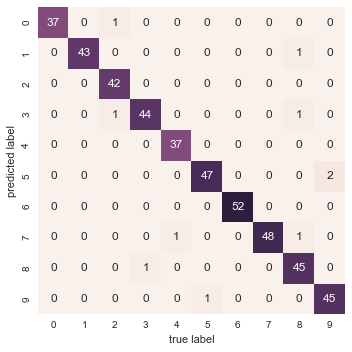 We find that a simple, untuned random forest results in a very accurate classification of the digits data.

This section contained a brief introduction to the concept of ensemble estimators, and in particular the random forest – an ensemble of randomized decision trees. Random forests are a powerful method with several advantages:

A primary disadvantage of random forests is that the results are not easily interpretable: that is, if you would like to draw conclusions about the meaning of the classification model, random forests may not be the best choice.