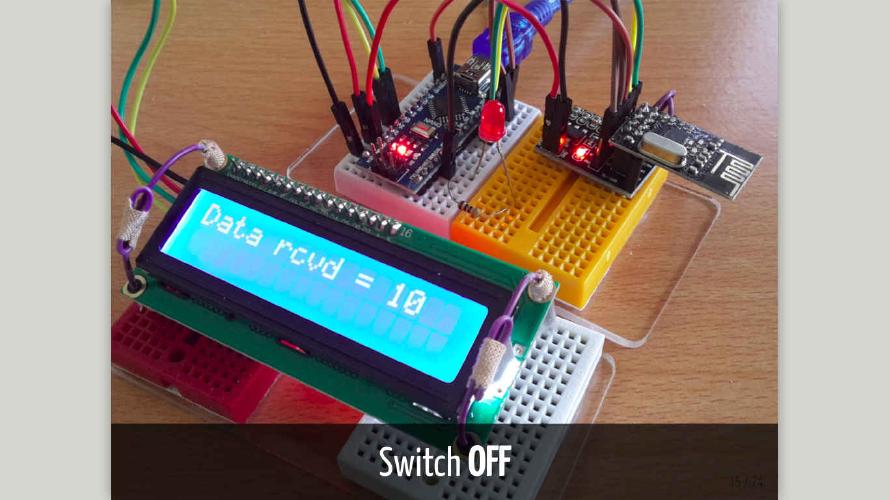 Preparation Notes: We reuse the previous nRF24L01+ example (Simple Remote Control) with some changes i.e.: for simplicity both nodes are now Nano-based, an LCD is attached to Node-2 for a better communication and debugging experience. In the next examples, the switch will be replaced with laser and PIR sensors.

As the pin resources of ucontroller is limited, your project may be not able to use normal LCD shield after connected with a certain quantity of sensors/actuators i.e. if you are doing more than a simple project, you may be out of pins using a normal LCD shield. With this I2C interface LCD module, you only need 2 lines (I2C) to display information.

LDR or Light Dependent Resistor (sometimes called a photoresistor or photocell) is a two-terminal, resistive component that increases or decreases its resistance depending on the light it senses. An LDR initially has a very high resistance. But, as light falls on it, the resistance will drop, allowing more current through.

A PIR (Passive Infra-Red) sensor is an electronic sensor that measures infrared light radiating from objects in its field of view. Normally this type of sensor would be used as a motion or proximity sensor. Quite often they are referred to as: PIR, Motion, Proximity, or Pyroelectric sensor.

The sensor in the PIR detects or “reads” infrared radiation “emitted” from objects all around us. Each object with a temperature above absolute zero will radiate infrared, even us humans, and even though we mere humans cannot see this. Note that the PIR just uses a relatively simple sensor - it is most definitely not an IR camera!

The sensor has only 3 pins: VCC which can be between +4V and +20V, GND and Vout. Vout has to be connected to one of the analog inputs and that’s all - in most cases.

DHT11 is a temperature and humidity sensor with a calibrated digital signal output. The DHT11 sensor has four pins. Connect the first pin on left of sensor (‘VCC’) to 5V of your board, the second pin (‘Data’) to a digital pin and the fourth pin (‘GND’) to ground. When the connecting cable is shorter than 20m, a 5K pull-up resistor between the second Pin of sensor and 5V is recommended.

Processing is an open source language/ development tool for writing programs in other computers. Useful when you want those other computers to talk with an Arduino, for instance to display or save some data collected by the Arduino.

How to Work with Processing?

If you just want to control an Arduino board from a Processing program, you may want to use the Arduino Library for Processing.

HC-SR04 ultrasonic ranging sensor provides 2cm to 400cm of non-contact measurement functionality with a ranging accuracy that can reach up to 3mm. It is a very affordable proximity/distance sensor that has been used mainly for object avoidance in various robotics projects.

Each HC-SR04 module includes an ultrasonic transmitter, a receiver and a control circuit. It has 4 pins: VCC, GND, Trigger and Echo pin.