One common type of visualization in data science is that of geographic data. Matplotlib’s main tool for this type of visualization is the Basemap toolkit, which is one of several Matplotlib toolkits which lives under the mpl_toolkits namespace. Admittedly, Basemap feels a bit clunky to use, and often even simple visualizations take much longer to render than you might hope. More modern solutions such as leaflet or the Google Maps API may be a better choice for more intensive map visualizations. Still, Basemap is a useful tool for Python users to have in their virtual toolbelts. In this section, we’ll show several examples of the type of map visualization that is possible with this toolkit.

Installation of Basemap is straightforward; if you’re using conda you can type this and the package will be downloaded:

We add just a single new import to our standard boilerplate:

Once you have the Basemap toolkit installed and imported, geographic plots are just a few lines away (the graphics in the following also requires the PIL package in Python 2, or the pillow package in Python 3): 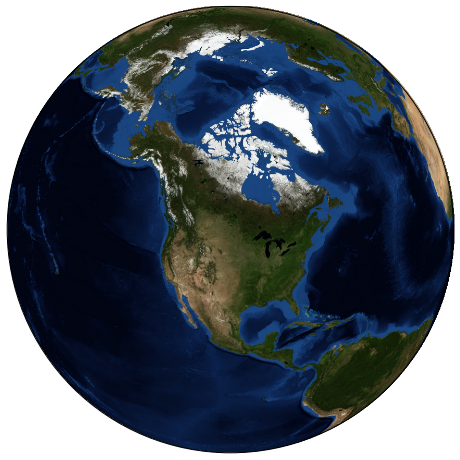 The meaning of the arguments to Basemap will be discussed momentarily.

The useful thing is that the globe shown here is not a mere image; it is a fully-functioning Matplotlib axes that understands spherical coordinates and which allows us to easily overplot data on the map! For example, we can use a different map projection, zoom-in to North America and plot the location of Seattle. We’ll use an etopo image (which shows topographical features both on land and under the ocean) as the map background: 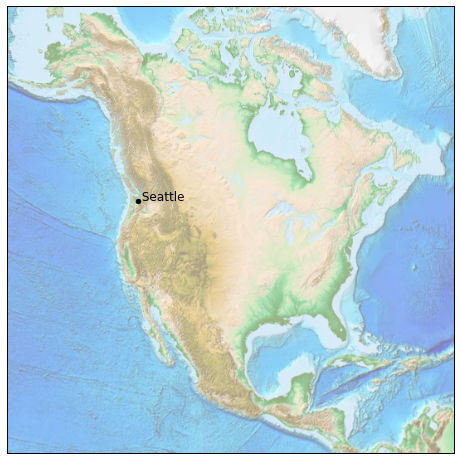 This gives you a brief glimpse into the sort of geographic visualizations that are possible with just a few lines of Python. We’ll now discuss the features of Basemap in more depth, and provide several examples of visualizing map data. Using these brief examples as building blocks, you should be able to create nearly any map visualization that you desire.

The first thing to decide when using maps is what projection to use. You’re probably familiar with the fact that it is impossible to project a spherical map, such as that of the Earth, onto a flat surface without somehow distorting it or breaking its continuity. These projections have been developed over the course of human history, and there are a lot of choices! Depending on the intended use of the map projection, there are certain map features (e.g., direction, area, distance, shape, or other considerations) that are useful to maintain.

The Basemap package implements several dozen such projections, all referenced by a short format code. Here we’ll briefly demonstrate some of the more common ones.

We’ll start by defining a convenience routine to draw our world map along with the longitude and latitude lines: 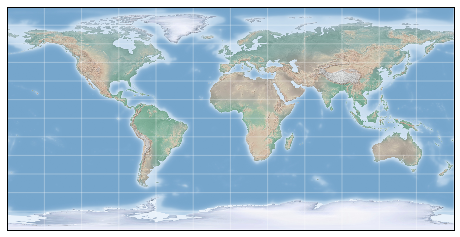 The additional arguments to Basemap for this view specify the latitude (lat) and longitude (lon) of the lower-left corner (llcrnr) and upper-right corner (urcrnr) for the desired map, in units of degrees. 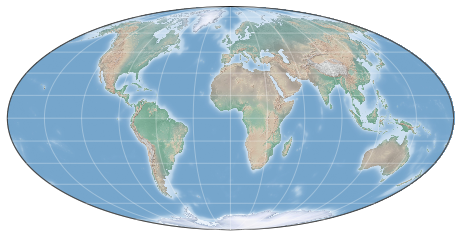 The extra arguments to Basemap here refer to the central latitude (lat_0) and longitude (lon_0) for the desired map.

Here is an example of the orthographic projection: 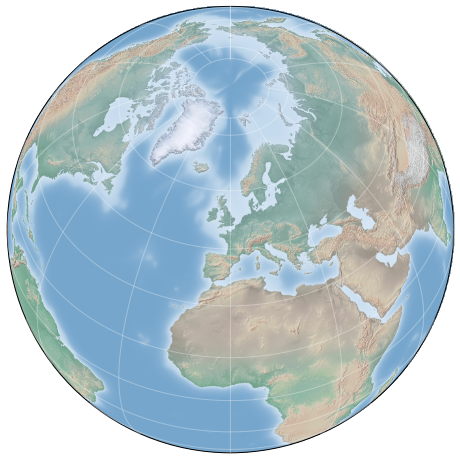 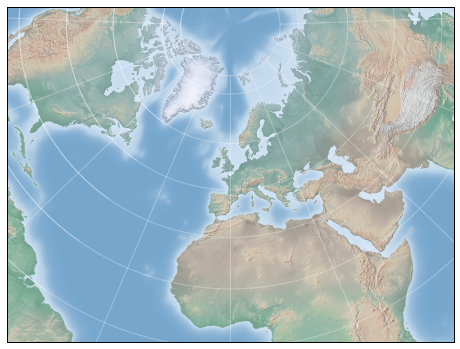 If you’re going to do much with map-based visualizations, I encourage you to read up on other available projections, along with their properties, advantages, and disadvantages. Most likely, they are available in the Basemap package. If you dig deep enough into this topic, you’ll find an incredible subculture of geo-viz geeks who will be ready to argue fervently in support of their favorite projection for any given application!

Earlier we saw the bluemarble() and shadedrelief() methods for projecting global images on the map, as well as the drawparallels() and drawmeridians() methods for drawing lines of constant latitude and longitude. The Basemap package contains a range of useful functions for drawing borders of physical features like continents, oceans, lakes, and rivers, as well as political boundaries such as countries and US states and counties. The following are some of the available drawing functions that you may wish to explore using IPython’s help features:

For the boundary-based features, you must set the desired resolution when creating a Basemap image. The resolution argument of the Basemap class sets the level of detail in boundaries, either 'c' (crude), 'l' (low), 'i' (intermediate), 'h' (high), 'f' (full), or None if no boundaries will be used. This choice is important: setting high-resolution boundaries on a global map, for example, can be very slow.

Here’s an example of drawing land/sea boundaries, and the effect of the resolution parameter. We’ll create both a low- and high-resolution map of Scotland’s beautiful Isle of Skye. It’s located at 57.3°N, 6.2°W, and a map of 90,000 × 120,000 kilometers shows it well: 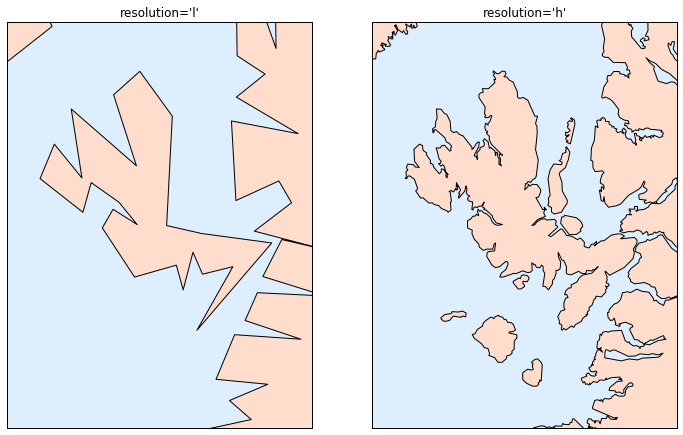 Notice that the low-resolution coastlines are not suitable for this level of zoom, while high-resolution works just fine. The low level would work just fine for a global view, however, and would be much faster than loading the high-resolution border data for the entire globe! It might require some experimentation to find the correct resolution parameter for a given view: the best route is to start with a fast, low-resolution plot and increase the resolution as needed.

Perhaps the most useful piece of the Basemap toolkit is the ability to over-plot a variety of data onto a map background. For simple plotting and text, any plt function works on the map; you can use the Basemap instance to project latitude and longitude coordinates to (x, y) coordinates for plotting with plt, as we saw earlier in the Seattle example.

In addition to this, there are many map-specific functions available as methods of the Basemap instance. These work very similarly to their standard Matplotlib counterparts, but have an additional Boolean argument latlon, which if set to True allows you to pass raw latitudes and longitudes to the method, rather than projected (x, y) coordinates.

Some of these map-specific methods are:

We’ll see some examples of a few of these as we continue. For more information on these functions, including several example plots, see the online Basemap documentation.

Recall that in Customizing Plot Legends, we demonstrated the use of size and color in a scatter plot to convey information about the location, size, and population of California cities. Here, we’ll create this plot again, but using Basemap to put the data in context.

We start with loading the data, as we did before:

Next, we set up the map projection, scatter the data, and then create a colorbar and legend: 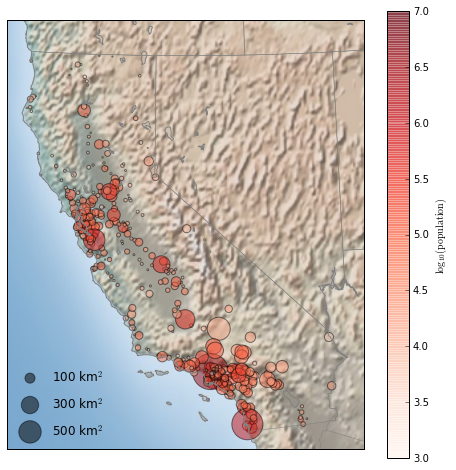 This shows us roughly where larger populations of people have settled in California: they are clustered near the coast in the Los Angeles and San Francisco areas, stretched along the highways in the flat central valley, and avoiding almost completely the mountainous regions along the borders of the state.

As an example of visualizing some more continuous geographic data, let’s consider the “polar vortex” that hit the eastern half of the United States in January of 2014. A great source for any sort of climatic data is NASA’s Goddard Institute for Space Studies. Here we’ll use the GIS 250 temperature data, which we can download using shell commands (these commands may have to be modified on Windows machines). The data used here was downloaded on 6/12/2016, and the file size is approximately 9MB:

The data comes in NetCDF format, which can be read in Python by the netCDF4 library. You can install this library as shown here

We read the data as follows:

The file contains many global temperature readings on a variety of dates; we need to select the index of the date we’re interested in—in this case, January 15, 2014:

Now we can load the latitude and longitude data, as well as the temperature anomaly for this index:

Finally, we’ll use the pcolormesh() method to draw a color mesh of the data. We’ll look at North America, and use a shaded relief map in the background. Note that for this data we specifically chose a divergent colormap, which has a neutral color at zero and two contrasting colors at negative and positive values. We’ll also lightly draw the coastlines over the colors for reference: 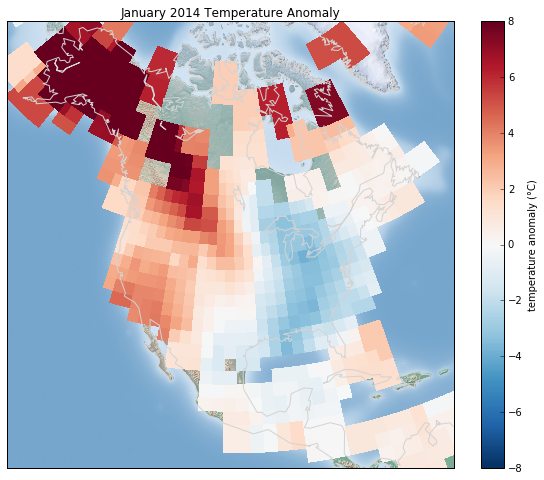 The data paints a picture of the localized, extreme temperature anomalies that happened during that month. The eastern half of the United States was much colder than normal, while the western half and Alaska were much warmer. Regions with no recorded temperature show the map background.