Up to this point we have been concerned mainly with tools to access and operate on array data with NumPy. This section covers algorithms related to sorting values in NumPy arrays. These algorithms are a favorite topic in introductory computer science courses: if you’ve ever taken one, you probably have had dreams (or, depending on your temperament, nightmares) about insertion sorts, selection sorts, merge sorts, quick sorts, bubble sorts, and many, many more. All are means of accomplishing a similar task: sorting the values in a list or array.

For example, a simple selection sort repeatedly finds the minimum value from a list, and makes swaps until the list is sorted. We can code this in just a few lines of Python:

As any first-year computer science major will tell you, the selection sort is useful for its simplicity, but is much too slow to be useful for larger arrays. For a list of $N$ values, it requires $N$ loops, each of which does on order $\sim N$ comparisons to find the swap value. In terms of the “big-O” notation often used to characterize these algorithms (see Big-O Notation), selection sort averages $\mathcal{O}[N^2]$: if you double the number of items in the list, the execution time will go up by about a factor of four.

Even selection sort, though, is much better than my all-time favorite sorting algorithms, the bogosort:

This silly sorting method relies on pure chance: it repeatedly applies a random shuffling of the array until the result happens to be sorted. With an average scaling of $\mathcal{O}[N \times N!]$, (that’s N times N factorial) this should–quite obviously–never be used for any real computation.

Fortunately, Python contains built-in sorting algorithms that are much more efficient than either of the simplistic algorithms just shown. We’ll start by looking at the Python built-ins, and then take a look at the routines included in NumPy and optimized for NumPy arrays.

Although Python has built-in sort and sorted functions to work with lists, we won’t discuss them here because NumPy’s np.sort function turns out to be much more efficient and useful for our purposes. By default np.sort uses an $\mathcal{O}[N\log N]$, quicksort algorithm, though mergesort and heapsort are also available. For most applications, the default quicksort is more than sufficient.

To return a sorted version of the array without modifying the input, you can use np.sort:

If you prefer to sort the array in-place, you can instead use the sort method of arrays:

A related function is argsort, which instead returns the indices of the sorted elements:

Sorting along rows or columns

A useful feature of NumPy’s sorting algorithms is the ability to sort along specific rows or columns of a multidimensional array using the axis argument. For example:

Keep in mind that this treats each row or column as an independent array, and any relationships between the row or column values will be lost!

Sometimes we’re not interested in sorting the entire array, but simply want to find the k smallest values in the array. NumPy provides this in the np.partition function. np.partition takes an array and a number K; the result is a new array with the smallest K values to the left of the partition, and the remaining values to the right, in arbitrary order:

Note that the first three values in the resulting array are the three smallest in the array, and the remaining array positions contain the remaining values. Within the two partitions, the elements have arbitrary order.

Similarly to sorting, we can partition along an arbitrary axis of a multidimensional array:

The result is an array where the first two slots in each row contain the smallest values from that row, with the remaining values filling the remaining slots.

Let’s quickly see how we might use this argsort function along multiple axes to find the nearest neighbors of each point in a set. We’ll start by creating a random set of 10 points on a two-dimensional plane. Using the standard convention, we’ll arrange these in a $10\times 2$ array:

To get an idea of how these points look, let’s quickly scatter plot them: 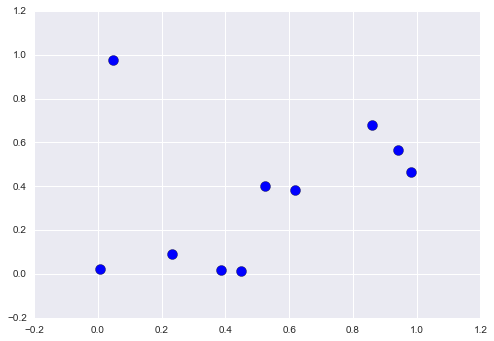 Now we’ll compute the distance between each pair of points. Recall that the squared-distance between two points is the sum of the squared differences in each dimension; using the efficient broadcasting (Computation on Arrays: Broadcasting) and aggregation (Aggregations: Min, Max, and Everything In Between) routines provided by NumPy we can compute the matrix of square distances in a single line of code:

This operation has a lot packed into it, and it might be a bit confusing if you’re unfamiliar with NumPy’s broadcasting rules. When you come across code like this, it can be useful to break it down into its component steps:

Just to double-check what we are doing, we should see that the diagonal of this matrix (i.e., the set of distances between each point and itself) is all zero:

It checks out! With the pairwise square-distances converted, we can now use np.argsort to sort along each row. The leftmost columns will then give the indices of the nearest neighbors:

Notice that the first column gives the numbers 0 through 9 in order: this is due to the fact that each point’s closest neighbor is itself, as we would expect.

By using a full sort here, we’ve actually done more work than we need to in this case. If we’re simply interested in the nearest $k$ neighbors, all we need is to partition each row so that the smallest $k + 1$ squared distances come first, with larger distances filling the remaining positions of the array. We can do this with the np.argpartition function:

In order to visualize this network of neighbors, let’s quickly plot the points along with lines representing the connections from each point to its two nearest neighbors: 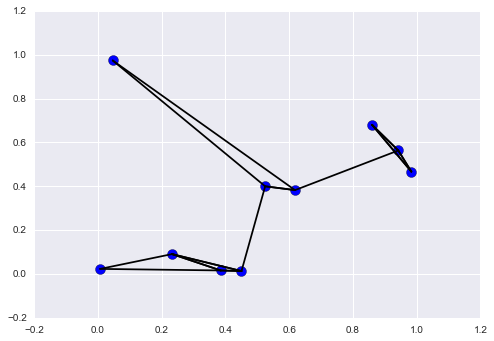 Although the broadcasting and row-wise sorting of this approach might seem less straightforward than writing a loop, it turns out to be a very efficient way of operating on this data in Python. You might be tempted to do the same type of operation by manually looping through the data and sorting each set of neighbors individually, but this would almost certainly lead to a slower algorithm than the vectorized version we used. The beauty of this approach is that it’s written in a way that’s agnostic to the size of the input data: we could just as easily compute the neighbors among 100 or 1,000,000 points in any number of dimensions, and the code would look the same.

Finally, I’ll note that when doing very large nearest neighbor searches, there are tree-based and/or approximate algorithms that can scale as $\mathcal{O}[N\log N]$ or better rather than the $\mathcal{O}[N^2]$ of the brute-force algorithm. One example of this is the KD-Tree, implemented in Scikit-learn.

Big-O notation is a means of describing how the number of operations required for an algorithm scales as the input grows in size. To use it correctly is to dive deeply into the realm of computer science theory, and to carefully distinguish it from the related small-o notation, big-$\theta$ notation, big-$\Omega$ notation, and probably many mutant hybrids thereof. While these distinctions add precision to statements about algorithmic scaling, outside computer science theory exams and the remarks of pedantic blog commenters, you’ll rarely see such distinctions made in practice. Far more common in the data science world is a less rigid use of big-O notation: as a general (if imprecise) description of the scaling of an algorithm. With apologies to theorists and pedants, this is the interpretation we’ll use throughout this book.

For our purposes, the N will usually indicate some aspect of the size of the dataset (the number of points, the number of dimensions, etc.). When trying to analyze billions or trillions of samples, the difference between $\mathcal{O}[N]$ and $\mathcal{O}[N^2]$ can be far from trivial!

Even this loose version of Big-O notation can be very useful when comparing the performance of algorithms, and we’ll use this notation throughout the book when talking about how algorithms scale.